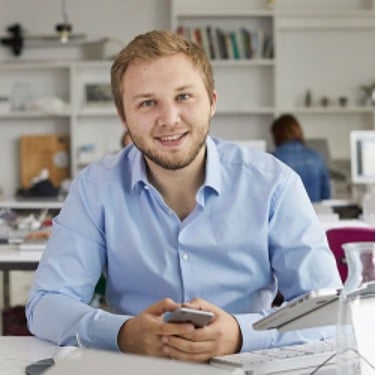 "The reconversion of hydrogen in a CHP is much cheaper than with a fuel cell."

Community Energy Supply of the Future

The future supply of community energy is climate neutral and inexpensive.

What sounds visionary is a reality in the “New West City” in Esslingen, Germany.

There city planners and energy experts are implementing a concept that is intended to serve as a blueprint for an ecological and economic community energy supply.

Electricity and heat for the community come from green energy and local storage systems ensure a high degree of autonomy and flexibility.

More than 500 apartments, a few shops, a twelve-story office building and a campus for around 1,800 students will be on the site after completion. The first residential buildings in the south of the community have already been built and occupied, the rest should be finished by 2022. 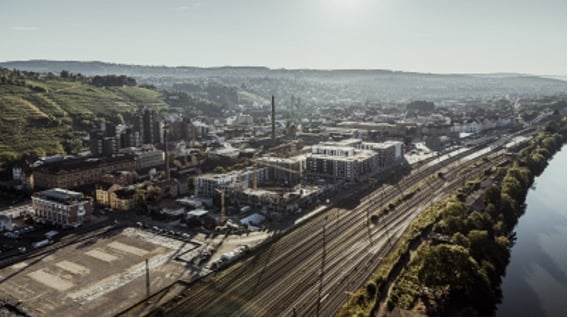 What makes the energy concept of the New West City special is:

The focus is on moderately reducing the energy demand and covering the remaining demand in a climate-neutral way. So, the focus is not on exhausting all energy saving options to make climate protection affordable here. The focus is instead to use regenerative energy to cover the remaining demand ensuring climate neutrality and it is cheaper in the long term than further reducing consumption through expensive energy-saving measures.

A mix of energy sources and systems and energy storage systems are required to make this a reality.

The electricity comes from local, roof-mounted solar panels or is purchased as green electricity.  Heat is generated with green gas or - indirectly, as will be explained below - also from green electricity. Batteries store excess electricity, and the areas of electricity and heat are linked. But while other concepts bring about this linking as power to heat with electric heating elements or with heat pumps, the sectors at the energy center for apartment block D with 167 residential units, the office building and the university buildings are merged differently.

The new energy center uses an underground electrolyzer to produce green hydrogen from electricity generated from renewable sources. This forms a “gas storage” that unlinks electricity generation and energy consumption, because the gas can be “converted back into electricity” in a combined heat and power unit (CHP) with a time lag. The heat generated during operation of the CHP flows into the local heating network. Another source of heat is the electrolyzer. It produces so much waste heat at approx. 55 ° C that it can cover the basic needs for heating and hot water.

The aim is "to show the functionality and suitability for everyday use of hydrogen production with all its advantages for the energy system at the neighborhood level", Highlighted  Prof. Dr.-Ing. Manfred Norbert Fisch from the Steinbeis Innovation Center for Energy, Building and Solar Technology (EGS) in a press release from the City of Esslingen.

The hydrogen storage system can unlink local electricity production from energy consumption and it can be help the grid compensate for excess or undersupply of electricity or, together with the batteries, to reduce the feed-in of solar electricity into the grid if there is a threat of grid overload.

“We cannot set up a large seasonal storage facility for hydrogen due to lack of space” explains Manuel Thielmann, expert for decentralized energy supply at Polarstern GmbH in Munich. His team worked out the innovative energy concept for the New West City. Therefore, the excess of hydrogen is fed into the natural gas network or sold to industry. Later, it will also benefit traffic. A hydrogen filling station is already planned. 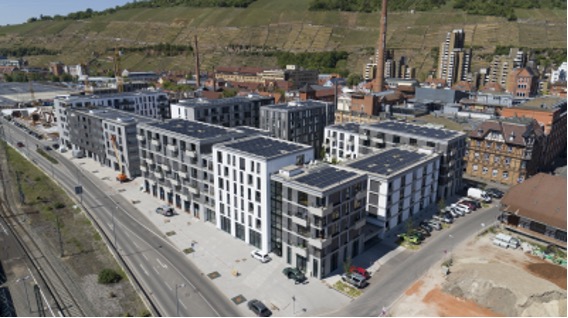 CHP is more economical than a fuel cell

The primary goal, however, is to use the hydrogen on site.

For the reconversion to electricity to take place at a reasonable cost, those responsible gave preference to the motorized hydrogen CHP. Thielmann gives the reason: “A fuel cell would have converted a higher proportion of the energy contained in the gas into electricity, but the costs per installed kilowatt are many times higher than with a motorized CHP. And we couldn't have obtained a fuel cell in this performance class from Europe. "

The heat from the CHP can be used right on site, so that a high overall efficiency can be achieved, says Thielmann. "We're not just looking at the efficiency of power generation, we're optimizing the energy system as a whole."

Cold from heat increases the annual degree of utilization

The fact that the air conditioning for the university buildings and the high-rise office building is also generated with heat contributes to the efficient use of heat: An absorption chiller effectively converts the CHP waste heat generated at a high temperature level into cold and rounds off the reconversion system to create an attractive combined heat, power and cold system.

After the decision against the fuel cell and in favor of a combined heat and power unit had been made, the choice of the provider was easy, "There is only one manufacturer in Europe whose CHPs offer the right performance and can be operated with 100 percent hydrogen" reports Thielmann referring to 2G Energy. In addition, the 2G CHP can also work with a hydrogengreen gas mixture or pure green gas, so operation of the 2G CHP is possible even if the electrolyzer fails. “Another factor in favor of 2G was the fact that the manufacturer can already demonstrate operational experience with pure hydrogen, for example with the project in Hassfurt,” adds the energy expert.

Commissioning of the 2G CHP in spring 2021

In spring 2021, 2G's CHP, an agenitor 406, is to go into operation in the New West City. Thanks to a soundproof container, the operating noise of the engine will not be heard in the nearby apartments.

With hydrogen as fuel, the CHP supplies around 150 kWel and 172 kWth output, in green gas operation the output is 200 kWel and 206 kWth. The peak-load gas boiler (1200 kW) installed in the energy center will only have to work on cold winter days or, during CHP maintenance work.

Do you have any questions or are you just curious to hear more?

Then click on one of the links below to connect with us.