One of today’s many hot topics is how the fossil fuels industry is substantially contributing to air pollution, land degradation, and global warming. We hear it over and over again, yet it’s an easy subject to sometimes put on the back burner, because at the end of the day, everyone needs electricity. It’s how society functions.

By the same token, it’s becoming increasingly popular to have conversations about alternative sources of energy. Knowing about the different types and how they can benefit your business sharpens the focus and makes the subject more interesting. But what, exactly, is renewable energy? And what are the specific advantages of using it? 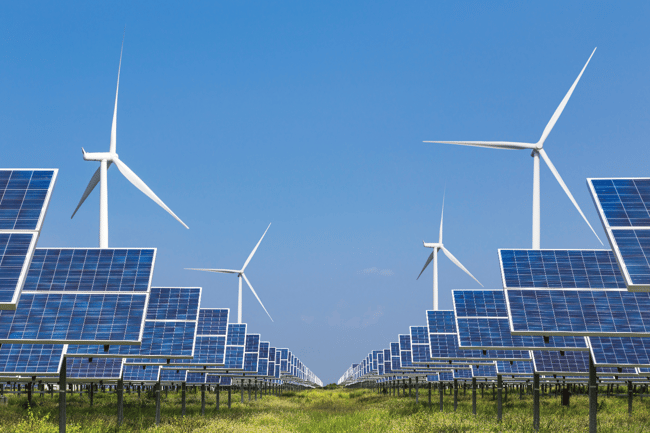 What Is Renewable Energy?

To understand renewable energy, it’s important to know where traditional energy comes from. For decades, electricity has been produced by burning fossil fuels, including crude oil, coal, and natural gas. They are sourced from underneath the Earth’s surface through mining, drilling, and fracking. Once burned, the heat created from combustion causes water to boil, creating steam. The steam is used to drive generators, which in turn generate electricity.

On the other hand, renewable energy is sourced from natural sources that replenish themselves constantly, such as sunlight, wind, hydropower, and biogas, to name a few.

5 Types and Examples of Alternative Sources of Energy

Solar panels are made with layers of glass and silicon cells. These cells absorb sunlight throughout the day.

Inside each cell there are two additional layers of silicon — one that’s positively charged and one that’s negatively charged. Sunlight causes the cells to emit electrons, and the motion from the electrons create electrical currents.

Whenever any object speeds up, it acquires what’s known as kinetic energy. Wind energy (or wind power) is the process where wind turbines convert the kinetic energy caused by wind into mechanical power.

This, in turn, can be converted into electricity. It’s the same process as creating energy at a traditional power plant, but by using wind energy instead of steam to drive generators.

Hydro energy (or hydropower) was one of the first sources of generating electricity. The process involves installing a power plant near a water source. Turbines are then used to push and spin water rapidly. This creates kinetic energy, which is then turned into mechanical energy, and finally, into electricity.

On a larger scale, hydroelectric plants operate by using a dam as a water reservoir. However, there are also plants that can work efficiently by diverting water through canals or using a pump-storage facility.

The Earth is composed of four layers:

Geothermal energy is the heat that’s below the Earth’s surface. It can be captured by drilling wells to pump steam or hot water. Typically, these plants are located near hot springs or geysers.

When organic matter — animal manure, biodegradable garbage in landfills, sludge from wastewater treatment plants, and food waste — starts decomposing, the bacteria that grows on it releases methane (also known as biogas). These fumes are purified through technology called a scrubber to remove contaminants.

Once clean, it becomes renewable natural gas (RNG). However, even if the gas is not fully purified, it can be utilized in combined heat and power technology, reducing costs of purification.

There are many benefits to switching to an alternative source of energy, both on a personal and business level. But as a business owner, the advantages are exponential. These include:

Generating energy from fossil fuels means generating electricity for all of your energy needs: power, heating, and cooling. And since you need all of them every single day, you have to pay for all of them — which will continue to increase as time goes by. This affects your bottom line and puts you at a disadvantage if any of your competing businesses are running on alternative sources of energy.

However, alternative sources of energy make your business less dependent (or maybe even completely independent) from power grids. And even if you choose to use traditional energy, using technologies such as combined heat and power allows you to generate extra energy from heat that would otherwise escape into the environment, meaning your energy costs would still be reduced.

Any time there’s a power outage, or if weather conditions make it likely that service will be interrupted, your business experiences downtime. This affects productivity and your bottom line.

But by powering your operations with alternative sources of energy, you can either decrease (or in some instances, even completely eliminate) this risk, since energy will continue to be readily available independently of a power grid.

Pollution from burned fossil fuels and methane released into the air when not reused for renewable natural gas have a significant impact on environmental pollution. This exacerbates global warming and contributes to a myriad of health issues in nearby communities.

Depending on the state where you live, you may have government incentives to use alternative sources of energy. These may include tax credits, grants, or the ability to create additional income by selling energy credits, as is the case with California’s Low Carbon Fuel Standard (LCFS) program.

2G Energy offers a wide array of CHP systems for renewable natural gas. We also have an extensive portfolio of successful CHP projects in the U.S., Canada, and Europe, and have installed over 6,500 systems worldwide, including those used in the Rialto Bioenergy Facility. In addition, we are the only CHP provider that offers technology that can run 100% on hydrogen.

Contact us to learn more about how combined heat and power can transform your operations and significantly reduce your long-term energy costs.